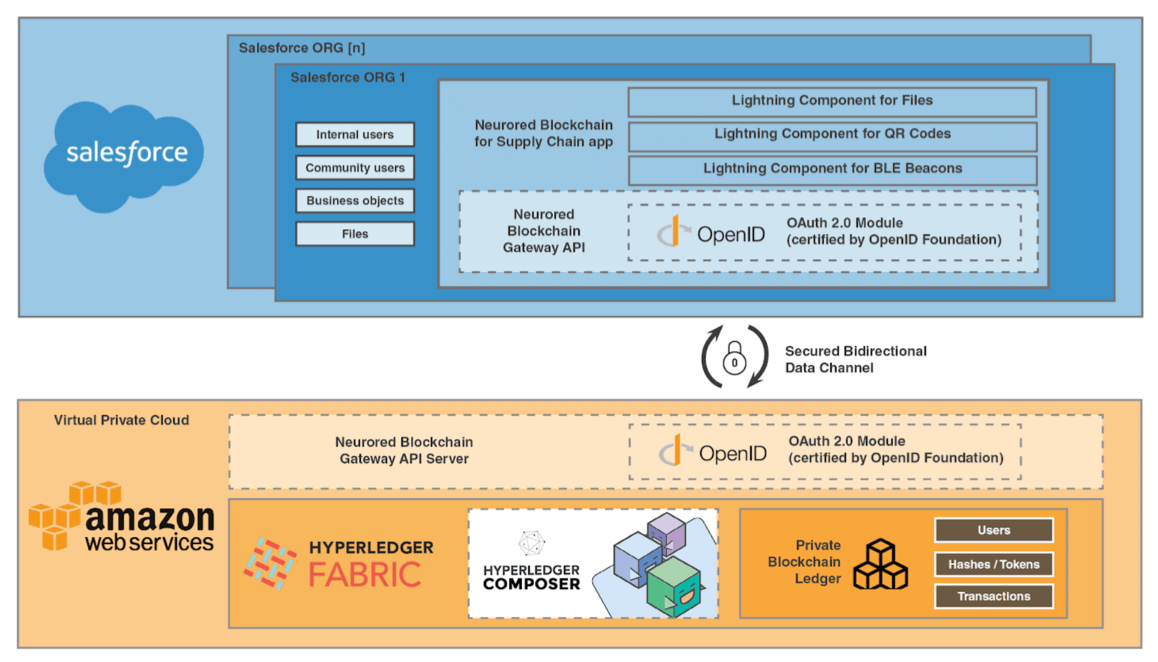 We’re all familiar with the buzz around blockchain and advanced track & trace systems and its potential impact on the industry, but sometimes the real progress of this technology gets lost in the media frenzy. At Neurored we have made it our mission to implement these enabling technologies to delight our customers by being the highest rated Supply Chain Management App on Salesforce Market Place (AppExchange).

To understand how Neurored’s App works, it is necessary to first understand what a cryptographic hash is:

A cryptographic hash function is a special class of hash function that is extremely difficult to reverse engineer, making it suitable for use in cryptography. It is a mathematical algorithm that produces an output (called ‘hash value’ or simply ‘hash’) of a fixed size irrespective of the size of the input (often called ‘message’). The only way to recreate the input data from an ideal cryptographic hash function’s output is to attempt a brute-force search of all the possible inputs to see if they produce a match.

Main properties of a cryptographic hash function are:

In the context of our App, we use hash and keep them in an immutable way on the Blockchain (token) with the purpose of recognizing the same “message” all along the different stakeholders of the Supply Chain. This message could be in the form of Files, QR Codes or Beacons.

From a technical point of view, our App is highly secured as we have developed a solution to integrate any Salesforce Organisation with Blockchain through OpenID. 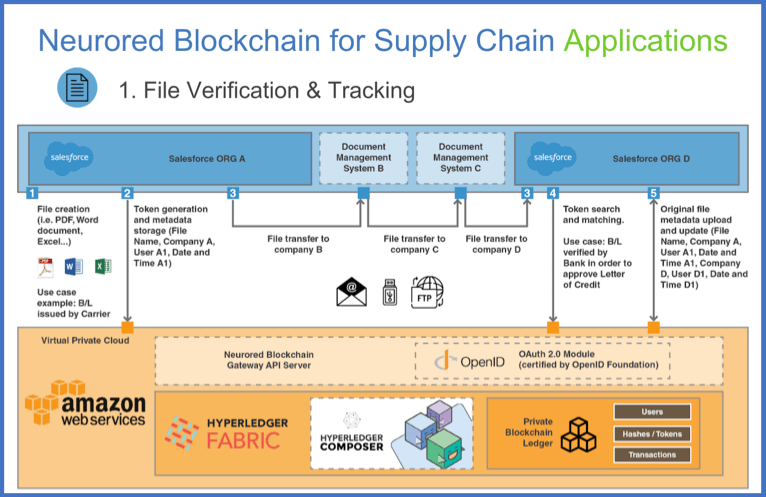 Through file verification and tracking, Neurored aims to tokenize Salesforce files to avoid fraud by tracking undesired changes on the files created or received. Our software verifies the original creator of the file on others’ Salesforce Orgs with the file we receive or upload on our own Salesforce Org. By plugging into this BlockChain App to your Salesforce Org, you will provide your employees and partners with an infallible tool to verify if the shared files remain as the original after any peer-to-peer transfer. If the verification is positive, they will keep on going with the business activity and raise the alarm & freeze when not.

Here is how it works:

One practical example is Bill of Lading (B/L) which is issued by the carrier. Our software will verify to other stakeholders of the supply chain if the B/L file they have uploaded into their own Salesforce Org is the one that was originally created by the carrier.

QR codes also known as Quick Response Codes, are two-dimensional bar-codes that can be read through a smartphone camera to directly open a website. QR Codes have been used in inventory management and manufacturing to get information about price, serial numbers, part numbers, dates, etc. but Neurored’s QR Code Tracking application can do much more than just getting information about inventory.

Neurored’s QR Code Tracking module allows businesses to track cargo when the shipments are going through different organizations. The main advantage of having a QR Code module is that it has the capability to upload and update the data every time the code is scanned. Our software generates a QR code associated with the token on Blockchain associated with any record on your Salesforce Org, for example, shipments or cargo. The QR Code will then be printed and attached to cargo as well as documents in order to track GPS positions where ever the QR Code has been scanned.

QR Codes can be scanned from any direction providing 360-degree scanning. They can store 100 times more information than the conventional horizontal bar-code and helps in reducing cost as it doesn’t require investment in heavy scanning machinery. Implementing such QR Codes on blockchain is what makes QR Code Tracking application unique. Neurored’s specific focus on QR Codes for Supply Chain Tracking and its secure integration with the Salesforce environment and BlockChain makes it a robust Supply Chain solution.

Neurored can also work in tandem with IoT technologies for helping businesses with powerful real-time cargo tracking solutions. As an example, Neurored’s software aims to run shipments with tokenized BLE Beacons. Beacons are battery powered small Bluetooth radio transmitting devices. They transmit radio signals on a regular interval and Bluetooth enabled devices can scan and display those signals once the beacon is within the range. BLE Beacons transmit a small amount of data in regular time frames which consumes less power, hence the name Bluetooth Low Energy.

The BLE Beacons are attached on the cargo of the shipments which allows businesses to track GPS positions, temperature and many other parameters through any Bluetooth enabled devices including mobiles, tablets, and Wi-Fi/Bluetooth access points.BLE beacons are an innovative cargo tracking solution which can also be read without being in direct line of sight. These beacons are very cost effective and require minimum effort for installation. Neurored’s focus on the Salesforce Platform for delivering more customized solutions to their customers is what makes us unique.

Come Start Your Journey with Us!

Does your business need to improve its tracking? Get a live demo by connecting with us here!

Interra Global Save Hundreds Of Hours Every Week With Neurored

Interra Global Save Hundreds Of Hours Every Week With NeuroredIn this month’s edition of Neurored’s Customer Success Stories, we spoke with Interra Global’s Sara Curry and Ken Thompson - Director of...
Read More

How Neurored’s Bunker Procurement Optimisation Tool can help you save Thousands in Bunkering CostsOf all the headaches in the time charter & bulk transport industry, bunker optimization is...
Read More

One positive to come out of the disruptions global supply chains have endured in recent times is that the supply chain crisis has drastically increased and improved awareness of the importance of...
Read More

2018 – THE YEAR TOWARDS SUPPLY CHAIN SMARTIFICATION

2018 – THE YEAR TOWARDS SUPPLY CHAIN SMARTIFICATION The complexity of Supply Chain has been resulting in continuous upstream and downstream problems historically. In a research published by Emerald...
Read More

Question: How does Neurored power the seamless shipper experience on Salesforce.com?  Answer: Whether you are a shipper, forwarder, trader, carrier or terminal operator, your business depends on...
Read More

COLLABORATION WITH TOP LOGISTICS TECHNOLOGY PROVIDERS IS CRUCIAL Gaining efficiency in today’s trucking and logistics market means leveraging the best technology at your disposal, and visibility is...
Read More

One positive to come out of the disruptions global supply chains have endured in recent times is that the supply chain crisis has drastically increased and improved awareness of the importance of...
Read More

BLOCKCHAIN AND SUPPLY CHAIN MANAGEMENT Blockchain paradigm is changing the way many goods are transacted between business and in the markets. This post brings you an executive comparative of the...
Read More

ROI NEW JERSEY COVERAGE Check out our latest PR feature with our friends at New Jersey ROI to learn more about the story of our expansion into the U.S. market and look out for 2018! “We want to...
Read More

BLOCKCHAIN AND SUPPLY CHAIN MANAGEMENT Blockchain paradigm is changing the way many goods are transacted between business and in the markets. This post brings you an executive comparative of the...
Read More

2018 – THE YEAR TOWARDS SUPPLY CHAIN SMARTIFICATION

2018 – THE YEAR TOWARDS SUPPLY CHAIN SMARTIFICATION The complexity of Supply Chain has been resulting in continuous upstream and downstream problems historically. In a research published by Emerald...
Read More

A SUPPLY CHAIN HORIZON FOR MILLENNIALS

A SUPPLY CHAIN HORIZON FOR MILLENNIALS Supply Chain For Millennials By Neurored The past week, talking about the future of SCM with some colleagues from the industry, it came to my mind an article...
Read More

Is 3PL on the edge of a disruption abyss?

IS 3PL ON THE EDGE OF A DISRUPTION ABYSS? Illustration showing positioning of 3PL today vs 3PL disruptors such as Uber Freight and how future 3PL will look like. “Uber Freight users (truckers)...
Read More

A GLIMPSE INTO THE FUTURE OF THE 3PL INDUSTRY

A GLIMPSE INTO THE FUTURE OF THE 3PL INDUSTRY In our last post, we opened the subject of the wrong-called “new disruptors” of the logistics and transportation industry. In this post, we will try to...
Read More

DIGITAL COLLABORATION IS ACCELERATING THE FUTURE OF LOGISTICS

DIGITAL COLLABORATION IS ACCELERATING THE FUTURE OF LOGISTICS Control Tower I recently enjoyed the privileged experience of a personal tour of the Port of Philadelphia in Pennsylvania, whose Master...
Read More

Get a real-time overview of events across the world from 80+ leading container lines.

Get Air Cargo Events directly from hundreds of airlines across the globe.

Track the real-time status of any vessel in the world.

Set up an automated upload of excel spreadsheets into the system

Pre-load all the data from the system into your custom quote template.

Integrate with leading carriers to get detailed schedules and rates information.

Assign markups and discounts based on customer attributes, demand and capacity.

Set up an automated upload of excel spreadsheets into the system

This website uses cookies to improve your experience while you navigate through the website. Out of these cookies, the cookies that are categorized as necessary are stored on your browser as they are essential for the working of basic functionalities of the website. We also use third-party cookies that help us analyze and understand how you use this website. These cookies will be stored in your browser only with your consent. You also have the option to opt-out of these cookies. But opting out of some of these cookies may have an effect on your browsing experience.
Necessary Always Enabled
Necessary cookies are absolutely essential for the website to function properly. This category only includes cookies that ensures basic functionalities and security features of the website. These cookies do not store any personal information.
Non-necessary
Any cookies that may not be particularly necessary for the website to function and is used specifically to collect user personal data via analytics, ads, other embedded contents are termed as non-necessary cookies. It is mandatory to procure user consent prior to running these cookies on your website.
SAVE & ACCEPT